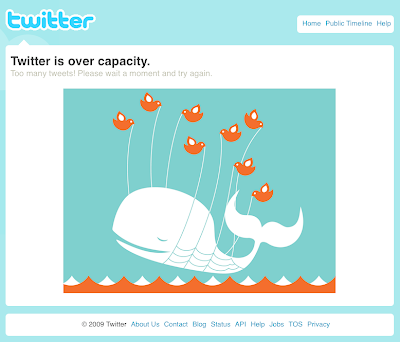 @twitter =p
Posted by the Alpha John at 5:51 PM No comments:

I Made the Amazon EC2 Cloud Rain

I got (2) $50 AMEX Gift Cards for my Birthday, which are like feces that can only be exchanged for exactly ${FECES} worth of merchandise (not one dollar more!).

Sure enough, I decide to buy a couple games for my PS3, because it's lonely and nothing I want costs ~$50.00.

I have a credit on my Amazon account for $119.45 (two Christmas returns and three gift certs). After carefully reading Amazon's allowable methods of payment:

Which cards can you use on Amazon.com? We accept the following cards as payment for your orders:

If you are using a Visa, MasterCard, or American Express gift card, please note the following restrictions:

Knowing the rules, I try to buy a $59.99 game with a $50.00 gift card, assuming the $9.99 can come off the $119.45 Amazon owes me (!). Sure enough, it tries to put the whole amount on the card and closes out the transaction. Five minutes later, I get the "Your Order Has Blown Up" email. I try to explain to Customer Service three times by email (with my good friends Pranvi, Rhett, and Ooshmani) that I read and followed the rules and the payment system exploded. Frustrated, I used the "Call Me now" option, and Caucasian Brian from Seattle called me back.

Over the next 28 minutes, I discovered:

I think bug-finding and brow-beating a human-Amazon-employee were far more rewarding that the $10 off my video game. I did fill out a survey and gave him excellent marks, but only because he laughed at my jokes.
Posted by the Alpha John at 5:08 PM No comments:

thirty candles.
Posted by the Alpha John at 8:59 AM No comments:

Now that gas is cheap (again), we wish it was even cheaper

Commentary: Americans sure do love them a discount (and how). 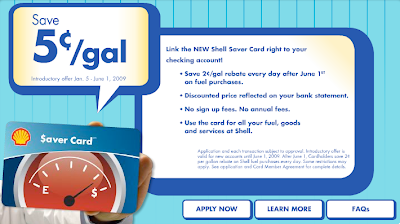 I was having my car inspected at a Shell station on Saturday, and I noticed the Shell Saver Card. It links your checking account to a card (more like a gift card than a credit card) to allow direct debit at the pump. If you sign up now, you save $0.05/gallon until June 1st, and $0.02/gallon thereafter.

I was reminded of this again today when I saw a story on Consumerist about something similar in the lone star state. I read the story, dismissed it, and returned to work for about 5 minutes before I lost control of the voices. They said:

Right now, you use your American Express Blue Cash to get 1% back on gas (and groceries) for the first $6500/year, and 5% back for the rest of the year after you cross $6500. Is this a better deal?!?! Are you leaving precious pennies on the table?

I mean, fuck, how do I get any work done? Even my god-damned voices have OCD.

Thankfully, I kept the spreadsheet I made last month to calculate my energy expenditures so I could hedge my estimated energy costs for 2009. For the closest comparison, I found where I hit $6500 on my AMEX (sometime in March), so I figured out 1.0% rewards on Dec-Mar, then 5% back on Apr-Nov. Then I divided the US average against what I spent to estimate gallons of gas bought, and multiplied it by (average price minus $0.05 for Dec-Jun and $0.02 for Jun-Dec). My math is a little b0rked, but here's what I got: 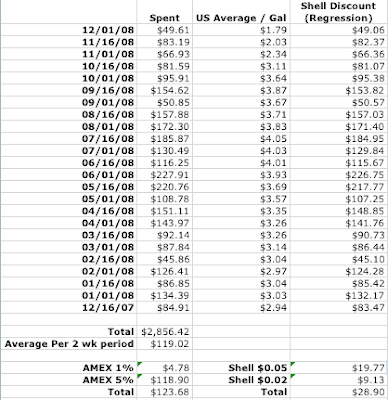 Caveats: 1) per-gallon discount is immediate, AMEX rewards is annual. 2) Rewards is likely overstated; as gas was expensive, my rewards were equally inflated 3) I would have to always go to a Shell to get these rewards, with my AMEX I can butter any gas station's bread as I see fit 4) Since I backed into the consumption numbers using the national average for that week, who the hell knows.

That's right, I did the math so you don't have to.

Had this program existed last year (when gas was hellua expensive), and I chose the Shell foolishness instead of using my AMEX Blue Cash, I would have lost out on almost $100 in rewards. I'm going to stick to my Blue Cash.

Voices satisfied, back to work.
Posted by the Alpha John at 4:18 PM 1 comment:

Labels: News from the Internet(s), puppies

I've had an office since 2000, and I haven't shared an office since 2001. I thought it would be an adjustment, but it wasn't at all. As it turns out, what's on my desk mattered more to me that where I sit. Since I'm a contractor here, I was free to buy my own keyboard, monitor, and bring my laptop to work (for the record: latop to work +5, child to work -5).

I've been in a cube since I started working here last November. At that time, all the feds all got offices and the contractors got cubes. Six months later, half the offices were empty and all the cubes were full, so they decided contractors can share an office.

Someone who worked in the office will be remote for at least the next six months, so his office opened up. My boss suggested I should move in, so I did. 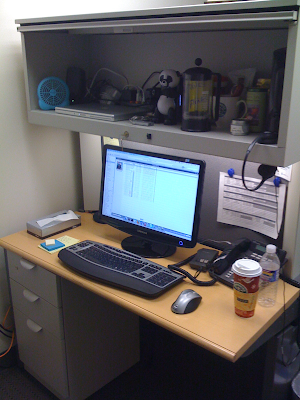 I had more room to spread out in my cube, but here I can pretend I moved from suburbia to a high-rise Tokyo. My two external hard drives (USB 2.0 and Firewire 400), laptop and speakers, french press and electric tea kettle, and panda-slave are tucked in the cabinet over the desk. I've run the cable for the monitor up, and the USB connection for the wireless keyboard down through the conduit in the corner (gray triangle).

After three extensions, and what I imagine was two weeks of running at risk, my executed contract extension came back today. It looks like I'm employed until next Thanksgiving.
Posted by the Alpha John at 2:48 PM No comments:

Hedging the Cost of Energy

What an exciting year for energy! If you were an investing genius like me, you bought high and sold low. All is not lost, however, because my investments in energy were (mostly) just a hedge, so they did exactly what they were supposed to do.

For example: my electric bill is about $100 per month, so in January I purchased $1200.00 in Dominion directly through Dominion DRIPS. Today, my stock is worth $1,020.98 (though I have more shares because of dividend payments). Even though the value of my stock went down, my energy costs went down, which should offset the loss. I'll be investing another $1200.00 next month.

Maybe you don't pay an electric bill, but you do put gas in your car. I decided to look at my last year of spending on gas, lined up against the average price of a gallon of gas in the US:

So what does all this mean? If I spend roughly $3,000.00 a year on gas, I should be hedging that amount in an equivalent energy hedge. That way, if the price of gas goes up, the value of my hedge goes up as well. If it goes down, even though the value of my hedge is reduced, so is the amount I spend on gas. This way, I'm don't get it coming and going when commodity prices fluctuate (which they are expected to through 2010 as we ease out of the current recession).

Now, where do you park your money? You could buy stock in Exxon-Mobile (a company forged in the fires of hell from pure evil), Shell, Chevon, BP, or any other company with a big stake in US retail gas sales. You could invest directly in oil through an exchange traded fund (ETF) like USO. You could invest in the broader energy market through an ETF like Vanguard's Energy ETF.

However you decide to hedge, it's something you should put on your list of New Year's resolutions.
Posted by the Alpha John at 2:35 PM No comments:

Next Mon/Tue and the following Mon/Tue/Wed, I'll be in iPhone SDK development training. By Christmas, I will have built my social networking War on Christmas app, putting that fat bitch Santa-Jesus on the unemployment rolls.
Posted by the Alpha John at 4:11 PM 1 comment: