Such a Thoughtful Puppy 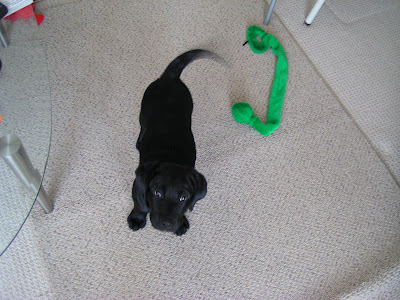 George: Maggie wants to know why Uncle John didn't come see her? She made chili and cornbread and cookies!
theAlphaJohn: Uncle John has a stomach virus
George: Oh noes!! Need anything? Maggie says she'll come over & bite it
theAlphaJohn: That would be perfect
George: Let us know when.
George: She'd like to bring you a chili lunch tomorrow if you are home w/ thermometer in your mouth still
theAlphaJohn: Isn't she the sweetest?
George: Oh hell yes

Posted by the Alpha John at 11:43 PM No comments: Links to this post

First I want to pat myself on the back: I completed 62 credits since Summer 2006, have three classes on my plate now, and just one more stands between me and graduation. There's no doubt I'll be done in Summer of 2008, perhaps forever.

School has wadded me up and thrown me in with the dirty laundry.

Working a new, full time job, and taking three classes at night (Mon/Wed/Thu), my schedule is pretty rigid. I'm pretty good at keeping track and getting everything done, but unexpected events throw me for a loop. As soon as I get a syllabus, I add any tests or assignment due-dates to my calendar. 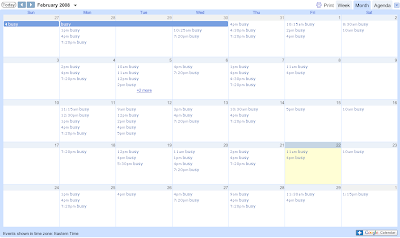 My Monday class is led by a professor I had last semester. He's a bright guy, and he really wants his students to 'get it' (by 'it', I mean an STD), but he's very disorganized and a little scatter-brained in his examples. He tends to dribble out homework assignments, give an unrealistic due date, then change the due date. I would rather that he either (1) post assignments AND due dates at the beginning of the semester, or (2) at least post due dates at the beginning of the semester, so I can PLAN well in advance for an assignment. All our assignments are done in groups, and everyone in my group HAS A JOB. He handed out our first on February 11th, and we were certain it was due Wed, 2/27. In fact, it was due 2/20, and we found this out when he gave us an extension to 2/21. That gave us only one day to collaborate and pull this thing together.

P.S. -- the assignment itself: asinine.

Of course we pulled it off and submitted it before midnight, but here I am: instead of doing my job, paying attention in another class, or sleeping, I'm trying to half-ass some assignment he half-assed himself. I'm paying for the pleasure of your unpreparedness.

Wednesday night was Business Law, where our professor (who works for DOJ, and used to be a DOJ trial attorney) scolded us for the grades on our first exam, and suggested that the lower quintile might want to consider dropping his class. I originally had high hopes for this class, but aside from some small legal details (understanding citations like 497 F.3d 955), it's been American history. Judicial review 5 U.S. (1 Cranch) 137 (1803) gives you a boner: I get it. I'm comfortable with the Bill of Rights, not just because I paid attention in 8th grade social studies, but I go to George Mason University. Dude may have been 5 feet tall WASP, but he was all BOR all the time. Blah blah blah.

Thursday nights are my required Systems Analysis class. Forget that I took a 200-level Systems Analysis class as a CS major (which was more difficult), or that I've done this professionally for the past 10 years, there is no mechanism in SOM at GMU to let me waive or substitute it. My professor is an adjunct who works for Oracle, and everyone who works for Oracle is a sales person. This is the first class I've had where the professor will be getting all 0s on his evaluation. I like Oracle's tools, but I don't need a 3 hours sales demo every week.

And...I'm sad because I want a puppy, but it would be lonely and die with my schedule. Most week days, I leave the house by 9:00am, and I'm not home until after 10:00pm. I'd rather have a puppy than school. George's new puppy, Maggie, is cuter than words: 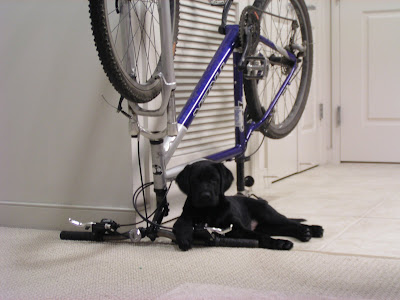 Tell me: would you rather have that sweet face, or a business law test?

I thought so.
Posted by the Alpha John at 11:28 PM 3 comments: Links to this post

While installing the newest version of Visual Studio, Microsoft shows you the kind of people who are using their tools to build a better life...well for nobody.

First, this former librarian, who needs to trade her horse-toothed grille for some botox: 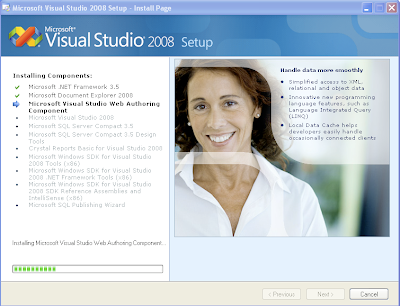 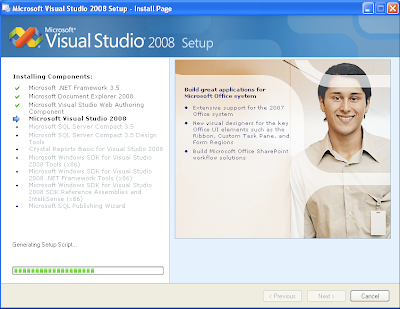 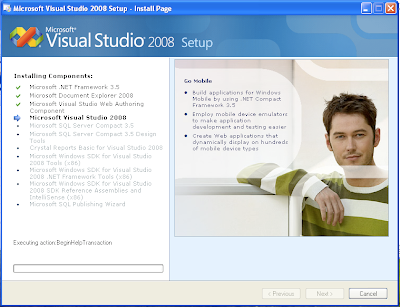 With as much money as Microsoft has, they could have bought a copy of Photoshop (or all of Adobe if they didn't want to use someone else's product) to retouch these pictures.

Then again, I guess the smudge tool can only do so much.
Posted by the Alpha John at 3:32 PM No comments: Links to this post

Call a Spade a Spade

KK: so do you think you'll be able to join us tonight? I need to verify with Onsaya if she's going
theAlphaJohn: probably not
i was going to go skiing, but it's too warm. need to work a little late and get caught up here. i have homework and other bullshit to get done this weekend
KK: boo hiss...
theAlphaJohn: it's a double edged sword, knowing me
on one hand, i bitch if you ask me too early if im available
KK: hee heeeeeeeee
theAlphaJohn: on the other, i'm not always free at the last minute
KK: lmao
theAlphaJohn: basically, i'm a pain in the ass
KK: 2 of a kind then...

Posted by the Alpha John at 4:58 PM No comments: Links to this post

Joey and Corey joined me in the Johnson Center at George Mason for Bill Clinton's pre-Potomac Primary rally for his cyborg proto-spouse.

8:53 - left class early for the 9:00pm "start". Wait, didn't Bill make 50 nations wait to get food at McDonald's?
8:58 - Billary's staff: HOMELY
9:08 - found a spot to watch, too bad 1,000 sociopathic Asians think it's Chinese New Year, but instead it's ADA and VIPs only
9:15 - speech from campus democrats about how awesome they are for organizing this awesome event in this not-so-awesome venue. The Patriot Center worked for the final four, but not so much for Clinton.
9:43 - somewhere, the 42nd President is loose, and fat coeds are not safe.
9:50 - **cheers** Blah blah Clinton.
9:56 - "my case for Hillary": cute face, chubby waist, thick legs in shape 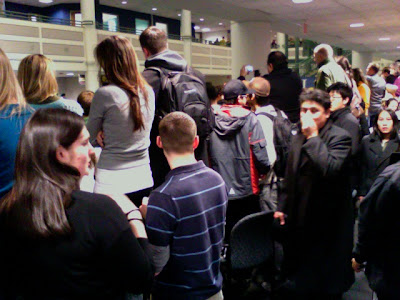 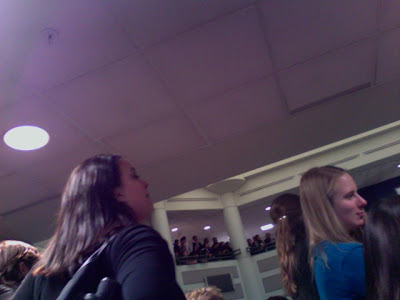 10:18 - how does NCLB work? MORE TESTS FOR EVERYONE!
10:19 - "our kids are smart". amazing considering facebook.
10:20 - "the tests are a wink and a nod", like my marriage. ;) save the music, arts, and other nerd activities. "we are not good at replicating excellence". "5 tests solve nothing", even though my starbucks franchise example makes no sense (they don't franchise).
10:23 - "make college accessible to all. raise pell grants raise hope scholarship. give young people more opportunities through americorps". direct lending. 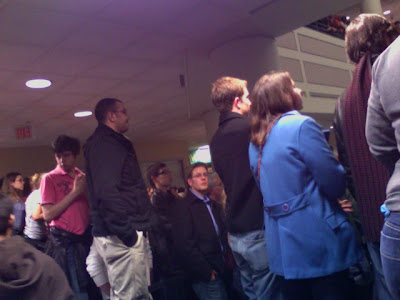 Posted by the Alpha John at 9:45 PM No comments: Links to this post 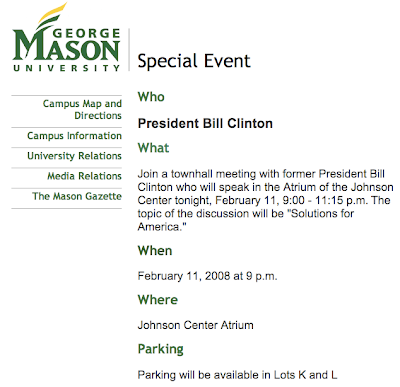 "What is thy bidding, my master?"
Posted by the Alpha John at 7:50 PM No comments: Links to this post

Google News Proves We Must Fire All the Reporters

This happens all the time.

Could you fuckers agree on the number before you publish your story?

And you -- Bloomberg. How about you copy edit the story before you post it? There's no fucking need to have 3 updates...the fucking bill passed 90 minutes ago.

I hate all of you.
Posted by the Alpha John at 9:19 PM No comments: Links to this post

I've been skiing twice this season. I have high arches, and the first time I went this season, I couldn't put weight on one foot after I got out of my boots.

I decided to order orthotics for my ski boots; ironically, Google lead me to Foot Dynamics, a company in home town. They sent me a kit to make foot molds using my oven, I sent them back, and less than a week later I had my orthotics. Total cost: $189.00.

Last week, I dropped my skis off at Willi's for a tune up. When I went in to pick them up, I asked the guys who work there if they could my new orthotics into my boots. The sales guys were very helpful, especially when they informed me that their orthotics were (at most) $100.00. The guy who helped me, whose feet are 2 sizes larger than mine, told me that he wore the same size boots that I did. While his buddy went in back to get my skis, he let me try on a couple pairs of boots that should be a better fit to my feet.

Long story short, my $20 tune up turned into $300, but my new boots are so comfy. I hope to try them out tomorrow after work.
Posted by the Alpha John at 8:29 PM No comments: Links to this post

Rugs are Oriental, People are Asian

Why did a Korean send me a text message that reads "Happy Chinese New Year"?
Posted by the Alpha John at 8:59 PM No comments: Links to this post