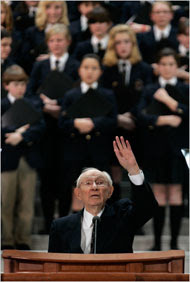 Naturally, on my first trip to Salt Lake City, the head of the Mormon church would die and create an international spectacle.

Gordon B. Hinckley, the president and prophet of the Church of Jesus Christ of Latter-day Saints who led Mormonism through a period of global expansion, died Sunday at his apartment in Salt Lake City. He was 97.

Well folks, when life gives you dead prophet, roll up your sleeves and make dead prophet-ade. That means we hop in our car, and head down to the Mormon Temple to witness the spectacle first hand. 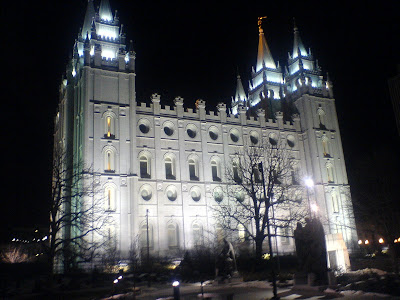 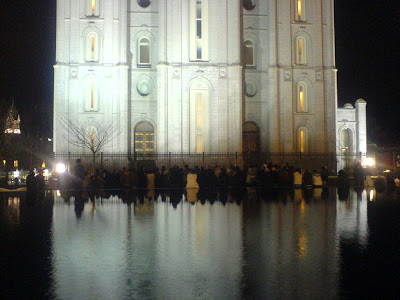 Much to the delight of the news crews that showed up, a group of studentmourners starting singing hymns:

Fret not, no business trips to Vatican City planned.

Meanwhile, Salt Lake City is wondering when Mittens is going to speak up...
Posted by the Alpha John at 2:51 AM No comments: Links to this post

Labels: Mormons, Pope on a Rope

Happy Birthday to Me 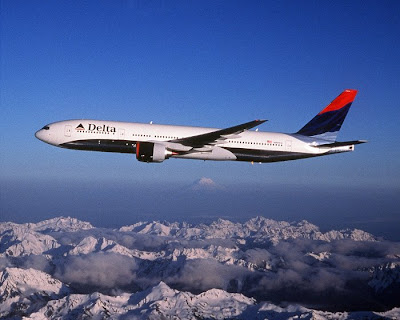 Smiley Face Events
1) Everyone on Facebook wishing me Happy Birthday
2) Red velvet cupcakes
3) One more year before my warranty expires
Posted by the Alpha John at 4:06 PM No comments: Links to this post

No Confession Will Erase This Sin

[I apologize for this back dated post. I started it the same weekend it happened, and have been working on the draft for over a week.]

I called Joey on Friday night to see what she was up to. It turned out that Chrissy Chrisdon was have a birthday celebration at Bailey's in Crystal City, so I decided to join them after work.

Once I found parking, I met up with everybody. We stayed there a little over an hour and had a nice time. 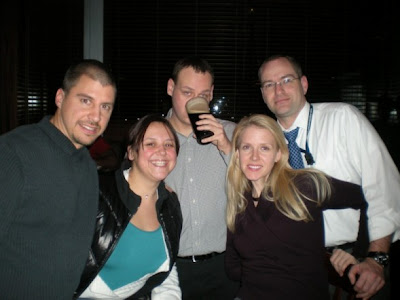 Walking to our cars in the parking garage, Joey says to me, "I'm going to Jay's now, you need to join me." I hesitated for a moment when she cast irresistible bait, "Jay's has a DJ named Pee Wee who uses two tape decks to play his oldies."

How could I possibly say no?

In a place like Clarendon, with a Whole Foods on every corner, you can't imagine how a place like Jay's hasn't been turned into 300 condos yet. Nay, it's the kind of bar that (speaking from personal experience) you don't mind urinating in the parking lot before you get in your car and leave.

As you walk in, Jay (the owner) is there to shake your hand. Just beyond his in the live-action Fred Flintstone (6'4, 350lbs, blond, white dress shirt half unbuttoned, red tie loosened around his collar, and chugging his bud light straight from the pitcher), and just to your left is Pee Wee: 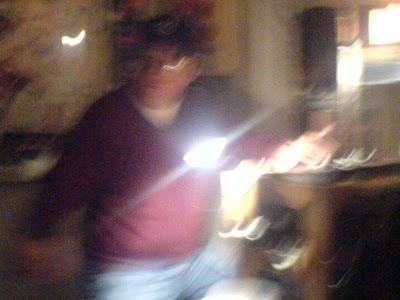 My mind went to Tony Wilson's voice over in 24 Hour Party People:

"And tonight something equally epoch-making is taking place. See? They're applauding the DJ. Not the music, not the musician, not the creator, but the medium. This is it. The birth of rave culture. The beatification of the beat. The dance age. This is the moment when even the white man starts dancing. Welcome to Manchester."

Well folks, this was no Manchester.

In the space of an hour: I watched a 60 year old woman dance with grind on guys 1/3 her age, I met Fred Flintstone's monstrous girlfriend/sister/sidekick, and I convinced a 37 year old woman who'd lost her voice to go back to college.

After the horror of Jay's, we went to Bob & Edith's where Joey made friends with our waiter, "20" (a very nice white kid who happened to be 20 years old, so Joey named him thus). On the floor under the booth across from us: 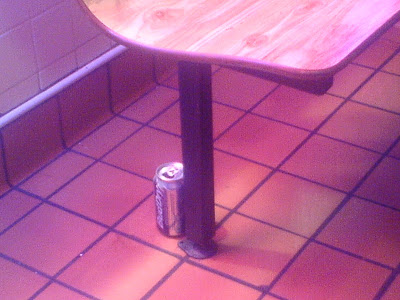 someone finished up their "for the road" Bud Dry before they got them some scrapple.

On the way home, I fucked up a turn in Arlington and got pulled over. The cop was cool and wrote me a warning, but the next day I saw that my GPS was also traumatized by Pee Wee and Fred Flintstone and watching me pee in a parking lot: 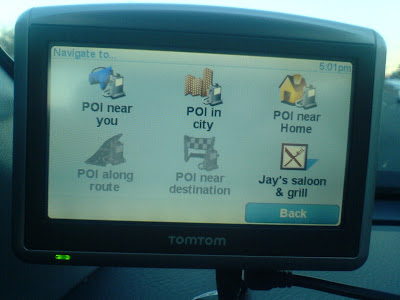 It had automagically added Jay's as a "Point of Interest", so I automagically performed a factory reset on it.
Posted by the Alpha John at 9:49 PM No comments: Links to this post 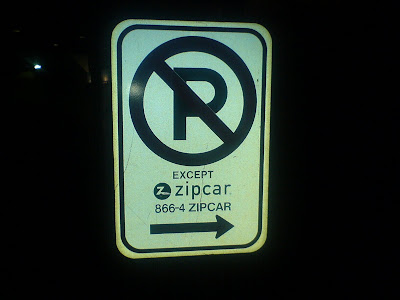 Why does Zipcar get all the best parking?
Posted by the Alpha John at 9:29 PM 1 comment: Links to this post

Charge Everything, Get Cash Back

As credit cards go, cash rewards are my favorite. Way back, I had an American Airlines AA Advantage card, but I realized that was like trying to furnish my apartment with skeeball prizes. You may recall that I had a Chase Perfect Card, which credited your bill each month with last month's rebate. Others, like the Amex Blue Cash Card I replaced it with, credits your bill with the rebate at the end of the year.

I didn't start using my Blue Cash until February, so that's a month sooner I could have reached $6,500. Keep in mind that many of my recurring monthly charges (haircut, maids) do not accept American Express, so those were going on my debit card.

For 2008, I've adopted the hybrid Amex Blue Cash / Chase Freedom approach. The Chase not only earns me 1% on the things I couldn't use my Amex for, but I've moved my tv/internet/cell phone over to it so I can earn 3% back on those. Chase gave me $50 in rewards for opening the account, and credits the rebate to your bill once you call and request. If you allow $200 in rewards to accumulate, Chase credits $250 to your account. My goal is to earn at least $150 in rewards from that card this year so I benefit from the free $100 ($50 signup plus $50 deferred rebate). I may hate the CEO of Chase bank, but I'll take his money.
Posted by the Alpha John at 2:55 PM No comments: Links to this post

When life gives you snow, get out your ski gear 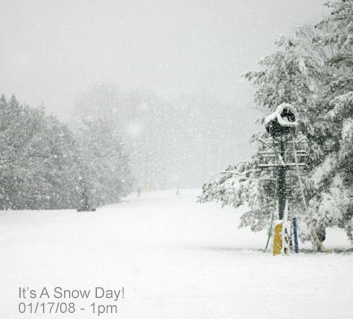 Before I left for work yesterday, I looked out the window and saw snow. Instead of panicking like most people in the DC metro area, I decided to throw my ski gear in the car. The closest mountain we have in Liberty in Pennsyltuckyvania, and my new job is 1/3 of the way there.

When packing the car, I realized that my ski jacket was missing. I had lost a little weight, and it was way to big on me (b/c it was probably a little too big to begin with); I had forgotten that it went to Goodwill in my last purge. After work, I went to REI and picked up a new one.

I got to the mountain at 7:30pm, by then it had warmed up and was raining. I was pretty wet when I went in and picked up my Advantage card. By the time I got to the top of the mountain, it was just foggy.

I had so much fun, even though I was soaked by the time I left at 10pm, and my left foot was killing me. I called my chiropractor this morning, and they are setup to do ski boot orthotics (in addition to regular shoe orthotics), so I'm going to see what's up with those at my appointment tomorrow.

I had dinner with Mary and Rob on Monday night, and Mary brought me a Christmas gift:

A Robot Panda-slave! And her eyes glow green! Mary suggested I name her Dinner, after my Facebook fur friend, but I think Susan Smith might be more appropriate.

I need to make some YouTube videos of it walking and crushing it's young. Stay tuned!
Posted by the Alpha John at 1:09 PM No comments: Links to this post 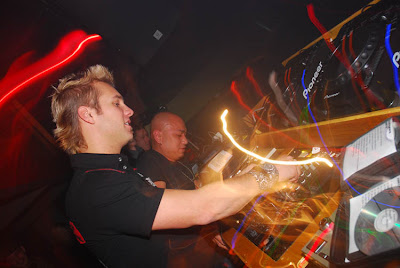 As a duo, JJ Flores and Steve Smooth have produced a half-dozen of the biggest club hits in the past several years. You may not recognize their names, but DJ's like Bad Boy Bill and Jon Carpenter spin Get Naked, Deep Inside These Walls, Freak You, Release, and Time for Love.

JJ and Smooth, however, didn't really drop any of their own hits during their Buzz set, they just spun gay house. 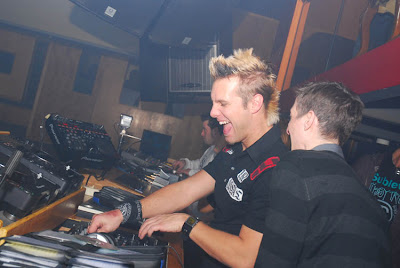 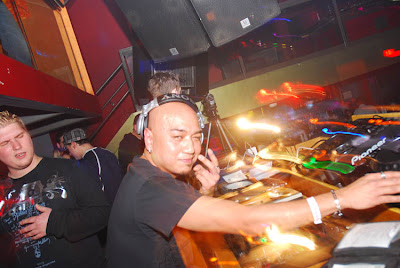 But as you can see, they had a lot of fun doing.

Corey and Tammy joined me on this trip, but the only horrible photos seems to be of me (natch). 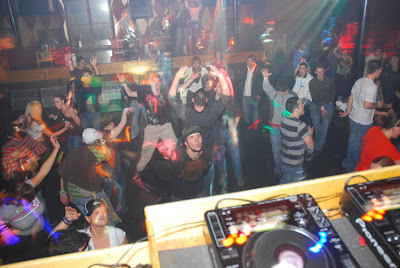 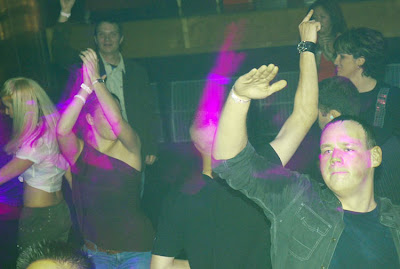 Posted by the Alpha John at 2:04 PM No comments: Links to this post

Remember When My Blog Posts Were Frequent and Interesting?

Yeah, me either.
Posted by the Alpha John at 12:53 PM 2 comments: Links to this post 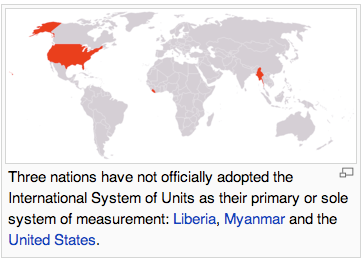 I sent this question to George:

Why is everything on Star Trek metric?

To which he simply responded:

It's January 7th in the DC suburbs, and it's 60 degrees out.

Back in November, I ranted about the lack of support for 4GB of ram in the MacBook Pro.

Never the less, my VMWare appliances were hungry for whatever additional ram I could feed them. For Christmas, my MBP got 4GB of ram, and guess what? 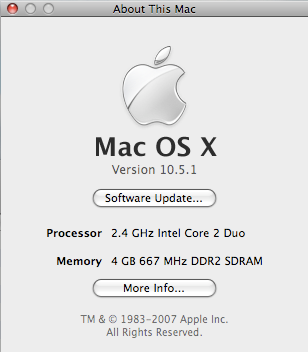 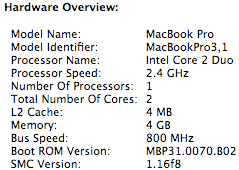 Now let's put it through the paces...
Posted by the Alpha John at 8:59 PM No comments: Links to this post

The Googleplex ... has launched ... Google Caucus.

Posted by the Alpha John at 11:41 PM No comments: Links to this post

An hour ago, I packed my lunch for tomorrow: 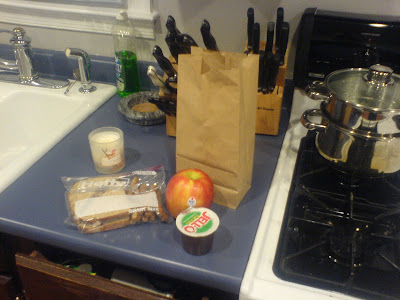 and then this happened:

so I chirped back in time to tell my 5th grade self not to kiss Erin Whiting.

Posted by the Alpha John at 10:34 PM No comments: Links to this post

Almost two years to the day, I can't fucking decide where to go on vacation.

Since I'm still in school, there are only a few times I can travel: spring break, intercession (2-3 weeks in May between spring and summer term), and after I finish in August. I haven't taken a real vacation since 2005, so the sooner the better.

London always pops to the top of the list, but I don't think I'll have enough time off to do all the things I want there. Besides, the USD -> GBP exchange rate is hateful.

I toyed with going to Los Angeles for some clubbing, possibly some Disney bullshit.

Thanks to iTunes, I think I've made up my mind. I want to take a vacation to 1994.
Posted by the Alpha John at 4:53 PM No comments: Links to this post

Me thinks its a Bug

An email that I was CC'ed on today:

We measured caCTUS-Lite performance in a Dev server by loading protocols incrementally. For each protocol we add we insert a protection element in CSM table.

Here is the login duration results:

Here is the code snippet which we reviewed during our last meeting. This getProtectionElementPrivilegeContextForUser is invoked during the login process.

Posted by the Alpha John at 10:57 AM No comments: Links to this post 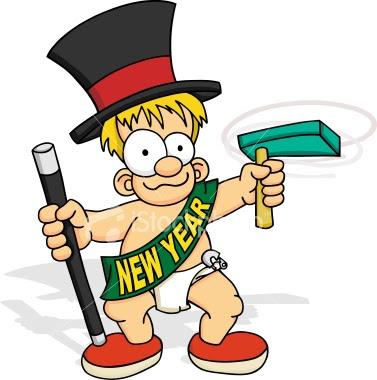 You can stick around, but only if you change your own poopy diapers.


What better way to celebrate than with this timely quote from my Aunt Dee, "This isn't the projects Joey; we don't smoke cigarettes on the front porch!"
Posted by the Alpha John at 11:51 AM No comments: Links to this post