My Vote for "Line of the Day" 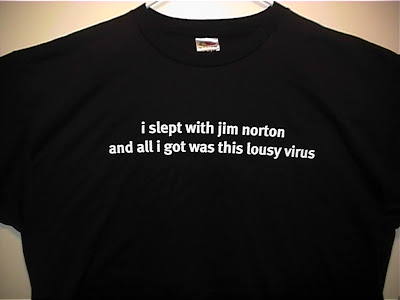 so plan accordingly.
Posted by the Alpha John at 1:14 PM No comments: Links to this post

I'd tell you what the actual GPA is, but the aforementioned bug prevents me from seeing my grades where they should be until tomorrow. I think it works out to 3.44 or something for the first summer term.

Now if I could get the other class I need, I'd find something else to complain about.
Posted by the Alpha John at 11:10 AM No comments: Links to this post

Lucky for you, Podcast #4 only has one song in it:

I figured I might have better control over Live with a midi controller, so when new M-Audio Axiom 25 showed up last night I figured I'd give it a whirl. As it turns out, I didn't use it at all to cut this mix.

The goal was just to do a midi overlay to remix a song, so I went with Discoteka by Starkillers (a song I'm not terribly fond of). I have an itch to fix Karl G's version of Chasing Cars, but I didn't want to start there quite yet.

Because drum parts should either sound real or synthetic, not both.

Posted by the Alpha John at 11:23 PM No comments: Links to this post

I found two bugs today, the first was in our own Patriotweb, and the second was in Bank of America's website.

I got a notice from my MKTG301 professor that grades were posted. When I checked in Patriotweb, no grade: 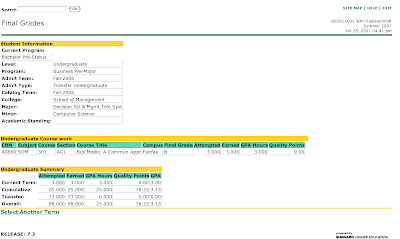 but then I ran a detailed degree requirements analysis, and there's my grade:

Next, fucking BofA's shitface website redesign is driving me insane. I receive my statements electronically, but the account I need to see my electronic statements for shows nothing online (the account I could care less about, however, has eStatements). Dandy. So I email my premier banking droid and ask if that can be regenerated.

What I need to see are my ending balances for the past 6-12 months. Then I realize that the last transaction each month is my Interest Earned, so I search for that: 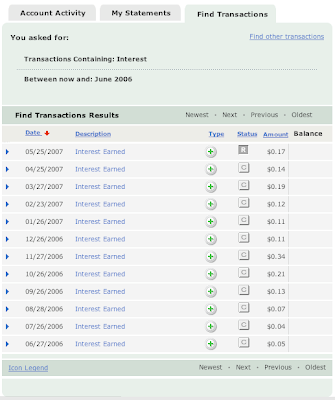 no God damned balances. Look again in the transaction listings:

and there's the balance. It's the same fucking transaction, and there's even a balance column in the quick search results (it's just empty).

Too bad there's no way to send useful feedback to the useless web designers who clearly forgot to do any requirements analysis before they rushed this shit out the door.
Posted by the Alpha John at 5:48 PM No comments: Links to this post

Will is responsible for this gross-osity

I found out last night that I don't need to take my MIS301 final: I already have an A.

My marketing presentation was today, and I think it went well.

Two finals on Thursday and I'm done for A Term.
Posted by the Alpha John at 6:29 PM No comments: Links to this post 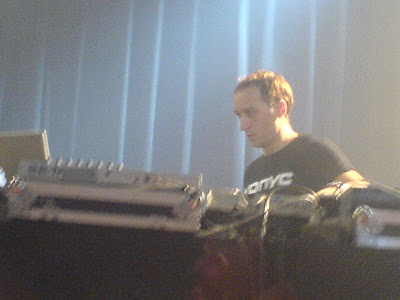 As previously mentioned, last night Buzzlife hosted Paul van Dyk at the 930 Club in Washington, DC. This was PvD's first stop to promote his new album, In Between. DCist previewed the show on their site yesterday.

WillDelphi, a pair of DJs I had not heard of before, opened for PvD. I can't find their website, but their set was very tight. One guy is up front spinning on a pair of Technics, and the other guy is behind him diddling his Powerbook to make the room go boom.

[The rest of the photos are from Utopium.net] 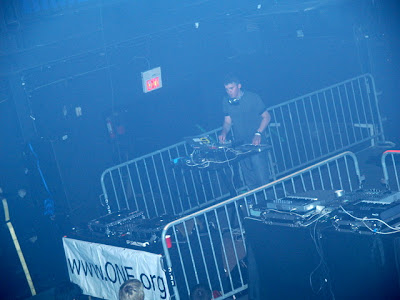 Once they closed out their set, it was time for ::untz untz:: robot dog: 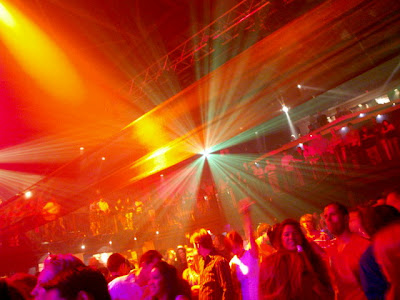 PvD got about 2 minutes into his first song before I got my ass off the mezzanine and down into the crowd. I made my way up front in less than 30 minutes. 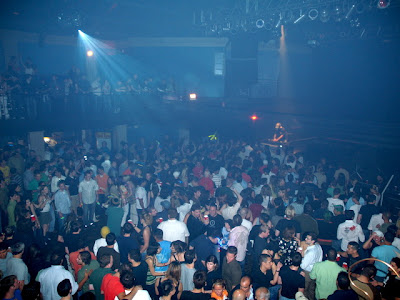 Since 930 is more of a live music venue than a club, there isn't a DJ booth. The "booth" was setup in the front-center of the stage with rails around it. "Why" you ask?? 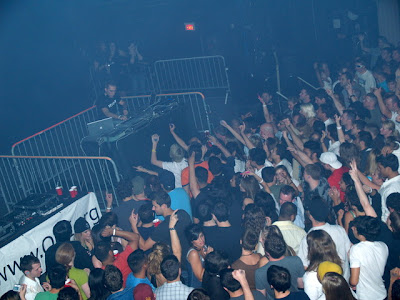 For when 1/3 of the floor crowd climbs up on stage and starts dancing: 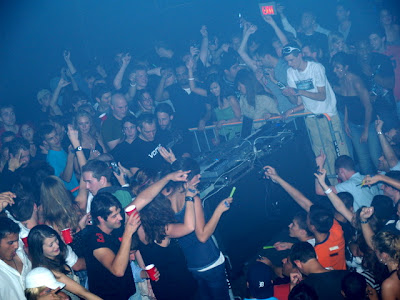 Fucking nuts. I must have danced for three hours non-stop. I was a disgusting, sweaty mess when I left. I could not have been happier.

I played several roles last night: bad frat dancer (when you're shoulder to shoulder, all you can do is work those arms), beat setter (because if you're frat dancing, you might as well be the human metronome), screamer (like I do at every live show), and several times I acted in loco-parentis ("Sweety! Get down from the front of the stage." "Dude are you ok? You are rolling balls and crashing into everybody.").

I'm still scouring the Internet(s) for more pictures. One of the photographers must have taken half a dozen with me in them. If so, then I can remove all the text from this post and let that speak for last night.

So yeah, today frowny face has turned into :p

UPDATE: While my own camera phone videos sucked, some fine folks on YouTube saved the day:

You can definitely hear me scream in that clip.

Also, this is an awesome clip from the second encore:

Posted by the Alpha John at 11:43 AM No comments: Links to this post

I'm still mad about Starscape: that I didn't go because I waited around for people who said they were going then bailed at the last minute.

To make up for it, I just bought tickets for Paul van Dyk's show at 930 Club tonight:

Trance star Paul Van Dyk has a new artist album, In Between, coming out Aug. 14 on Mute. The first single, "White Lies," comes at you July 31. Collaborators on the album include David Byrne of Talking Heads fame and the Pussycat Dolls' Jessica Sutta. The DJ/producer is hitting the road to support the release:

Right after Masters practice, my crack is in the car and on the way to DC all by myself. I don't need nobody to be steppin' up in my cabbage patch tonight.
Posted by the Alpha John at 3:21 PM No comments: Links to this post

Summer School is the Awesome(s)!

MKTG301: Exam yesterday, 89%. Group Marketing Plan is due Monday, and our group presentation is Tuesday. After that, it's just the final exam.

SOM301: Group presentation was today, went very well. Powerpoint, handouts, and pamphlet all came out great. Portfolio is due on Thursday, then just the final exam.

Then a week and a half off before I do it all over again.

In addition to the head cold I have, I've slept a total of 4 1/2 hours since I woke up Sunday morning (30 mins on a bench before class Monday, 1 hour between classes on Monday, and 3 hours last night).

My goal is to have my SOM301 portfolio done tonight, before dinner.
Posted by the Alpha John at 5:43 PM No comments: Links to this post

A quick search for Jew found this:

I immediately added it!

Speaking of Andrew, he found this madness on the Interweb(s) today:

A Berkeley watchdog organization that tracks military spending said it uncovered a strange U.S. military proposal to create a hormone bomb that could purportedly turn enemy soldiers into homosexuals and make them more interested in sex than fighting.

Pentagon officials on Friday confirmed to CBS 5 that military leaders had considered, and then subsquently rejected, building the so-called "Gay Bomb."

Andrew's concern was whether or not he could get this new hormone in a personal-sized spray bottle. I told him Calvin Klein is planning to market it under the brand name CK: Queer.
Posted by the Alpha John at 3:54 PM No comments: Links to this post

Labels: Andrew, News from the Internet(s)

So I'm in line at Starbucks behind some random white kid: he's maybe 18 years old, probably 5'6" and all of 130lbs. He orders some craizmo expresso drink, and takes out his wallet to pay.

When he does, he has to push aside a MAGNUM (all caps) to actually get his money out of his wallet.

Just a hunch, but I'm guessing that his MAGNUM expired sometime during the Clinton administration.
Posted by the Alpha John at 5:35 PM No comments: Links to this post

Take Away my Text Messages

Some cute 14 year old girl was staring at me in Chipotle. I'm like "yea! teen idol". Except she was autistic.

I just put on my new orange boxer briefs. How jealous are you?? 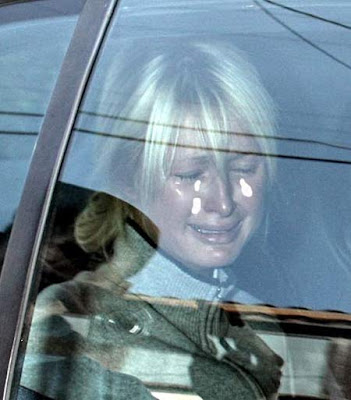 This is a boner of news cycle.
Posted by the Alpha John at 7:02 PM No comments: Links to this post

Labels: News from the Internet(s), OMG Nobody Cares

Nothing that I'm doing in school is particularly hard, but trying to stay ahead of what's due is a challenge.

Tonight I have an MIS quiz, then tomorrow I have my midterm for SOM. Friday my webpage is due for MIS and I have a Marketing experiment I have to do before that class. Monday I have an exam in Marketing and another quiz in MIS.

The only good news is that my group project for SOM is due next week and the one for MKTG is due the following week.

In other news, if you need to find me on Saturday, start your search at Starscape 2007 where I and 5,000 of my closest friends will be blowing off some steam. (fizzle! fizzle!) I sent an email to everyone earlier this week:

I know most of you already have plans to go to Glow@FUR on Saturday (June 9th) for Ferry Corsten's CD release party, but this is your reminder of a far more important event:

That's right dawg...16 hours of "untz untz robot dog". Dig out your baby jewlry and take your hello kitty backpack to the cleaners. If anybody needs a ride, I've got room.

The gorgeous ladies of Winchester will make a surprise appearance.

The legendary Starscape Festival returns for its ninth year, to bring you a day and night of music and entertainment under the stars, culminating in the sunrise over the Chesapeake Bay. This year's event has four areas of music:

The Buzz Area will be under a 10,000 sq ft tent, focuses on electronic dance music and features an audio visual assault on the
senses.

The Drum n Bass area takes place under a 6,000 sq ft tent, and features a bass heavy sound system sure to make your insides shake.

The Beach Stage features bands all day until midnight, then djs from midnight to the sunrise.

...I doubt any of them are going to Ferry's release party.

I should also note that Thursday, June 14th, Paul van Dyk will be at the 930 Club: 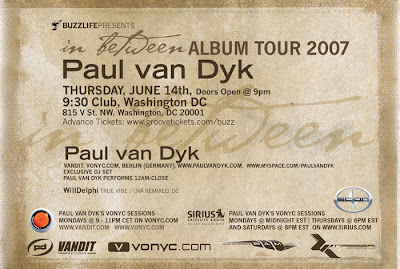 Which is where you're likely to find me.

Please don't feel neglected if you haven't heard from me, I'm still trying to figure out when I'm going to buy a new lawn mower so I can cut my grass!
Posted by the Alpha John at 4:11 PM No comments: Links to this post

I'm learning so much in MIS301

Then, we learned how DNS is powered by webcrawlers.

This class is e-Stupid.
Posted by the Alpha John at 8:51 PM No comments: Links to this post 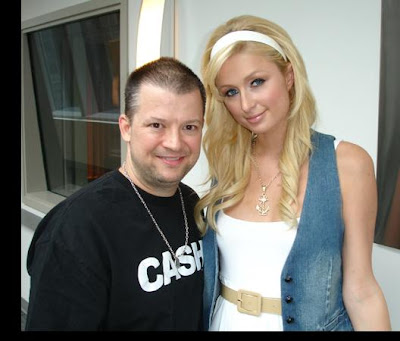 Joey, Katie, and I were able to get tickets for the taping of Jim Norton's new HBO comedy special. Apparently the well-wishing worked because his set was fucking hysterical. The theater was hot as balls, but you'll still be able to hear me screaming from the audience.

After the show, People Against Censorship has a rolling billboard right outside: 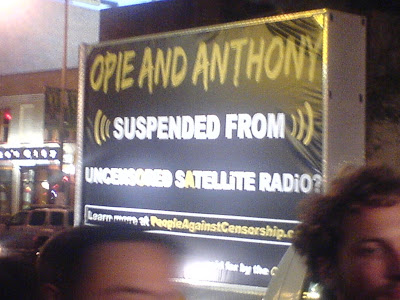 haha! Lil' Jimmy has AIDS. RAMONE! Fetch him some broth and a robe.
Posted by the Alpha John at 3:08 AM No comments: Links to this post