The Downfall of The O.C. 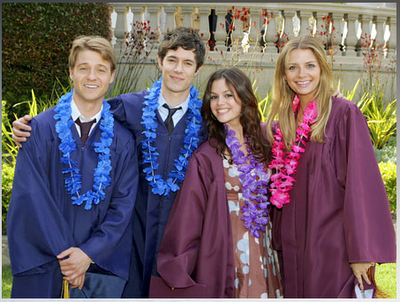 One could argue that The O.C. was never a good show. But as someone who came of age during the height of 90210's popularity, I think America's tastes are clear: life in New York City and Southern California is a dichotomy that appeals to everyone.

We watch Seinfeld. We shop at Hollister. Borat goes to Times Square. Paris Hilton gets a DUI in Los Angeles. There is no center to our cultural universe, but it definately has two poles.

It wasn't until the second season of The O.C. that I started watching, and only infrequently. I found the characters more likable than their 90210 counterparts, and eventually I Netflixed the first season. The writing was brilliant: tight, interesting, hilarious.

I continued to watch, but saw that the second and third seasons together made up the sophomore slump. The show was running out of steam.

My DVR was set to record the show, and I realized a few weeks ago that it hadn't shown up yet. I was so disgusted with the last season finale, I assumed that I just deleted it. Just a few days later, the fourth season premier shows up (in November?). I watched it a few nights later while I was eating dinner and realized that The O.C. has officially jumped the shark.

I don't want this to be an episode review, but a quick recap is in order. Marissa died in the last episode, and five months has passed since then. Julie (Marissa's mother) is doped out of her mind, and Ryan is living in the backroom of a bar and illegally ultimate fighting for free to get out his (anger|rage|aggression|stupidity). Basically, they wrapped an entire season of story and angst into a single episode where everything is resolved and Ryan moves home to the pool house.

And with that, I get an extra hour of my life back every week.
Posted by the Alpha John at 9:45 AM