NEW YORK (CNNMoney) -- Wal-Mart has told its employees that it's OK to once again greet shoppers by saying "Merry Christmas" this holiday season instead of the generic "Happy Holidays."

CNN confirmed that Wal-Mart will announce Thursday that it plans to use the phrase "Merry Christmas" in products and around its stores this holiday season.

The announcement comes a year after religious groups such as The American Family Association and The Catholic League boycotted retailers including Wal-Mart last holiday season for excluding the word "Christmas" from products sold in stores.

"We, quite frankly, have learned a lesson from last year," Wal-Mart spokeswoman Linda Blakley told USA Today in a separate report. "We're not afraid to use the term 'Merry Christmas.' We'll use it early, and we'll use it often."

In what alternate reality do a couple religious groups tell Wal-Mart how to run their business? These are the people who told their suppliers (little companies like Unilever) that they needed to use RFID tagging to conform to Wal-Mart's stringent supply-chain procedures.

Make no mistake, Wal-Mart does not do what people tell them, Wal-Mart does what it wants to. If they want to butt-fuck the baby Jesus all holiday season, then that's what they're going to do.

According to a Craigslist Rant & Rave I wrote read, Speaker Nancy Pelosi can fix this too: 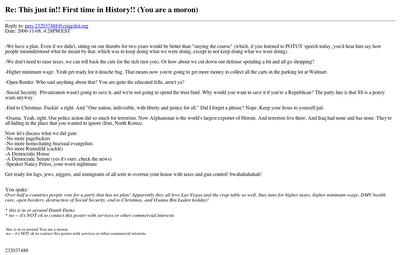