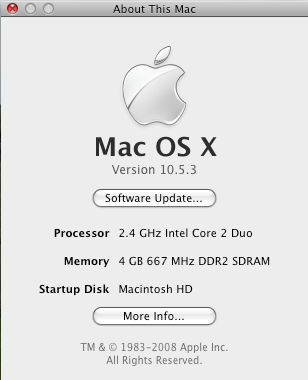 I downloaded the new Mac OS update today. Let's see how my MBP feels about it.

* Fixes a font issue that could result in Helvetica Narrow being used in applications instead of Helvetica.
* Addresses an issue with stuttering video and audio playback in certain USB devices.
* Resolves stability issues with Word of the Day, iTunes Artwork, and Slideshow screen savers.
* Fixes an issue in which certain attached hard drives may not show up in the Finder.
* Addresses an issue with .Mac syncing of Dashboard widgets over multiple Macs that use different screen resolutions.
* Includes additional RAW image support for several cameras.
* Improves the accuracy of the Software Update progress bar indicator.
* Addresses an issue in which Finder may not be available if the computer name is blank in Sharing preferences.
* Improves Active Directory binding and login.
* Eliminates a delay when logging in as an Active Directory user in a .local domain.
* Improves Spotlight searches on a AFP file server volumes.
* Clients can now change their password at the login window when bound to a Mac OS X 10.4 Open Directory server.
* Improves Safari reliability when connecting to the Internet through a Microsoft ISA proxy.

* Includes fixes for Time Machine compatibility with Time Capsule.
* Resolves certain issues when backing up a portable Mac that is on battery power.
* Addresses compatibility issues with Aperture 2.
* Addresses reliability issues when performing a full restore from a Time Machine backup.
* Fixes an issue in which certain function keys may be disabled after using Time Machine.
* Fixes a possible alert message that incorrectly states a backup volume does not have enough space.
* Updates Time Machine to reliably restore attachments and messages in Mail.

Thank the Baby Jeebus that the Software Update Progress Bar is now more accurate!
Posted by the Alpha John at 7:05 PM